Figure in the Landscape. Within the Levels and Horizons of Time. 2018 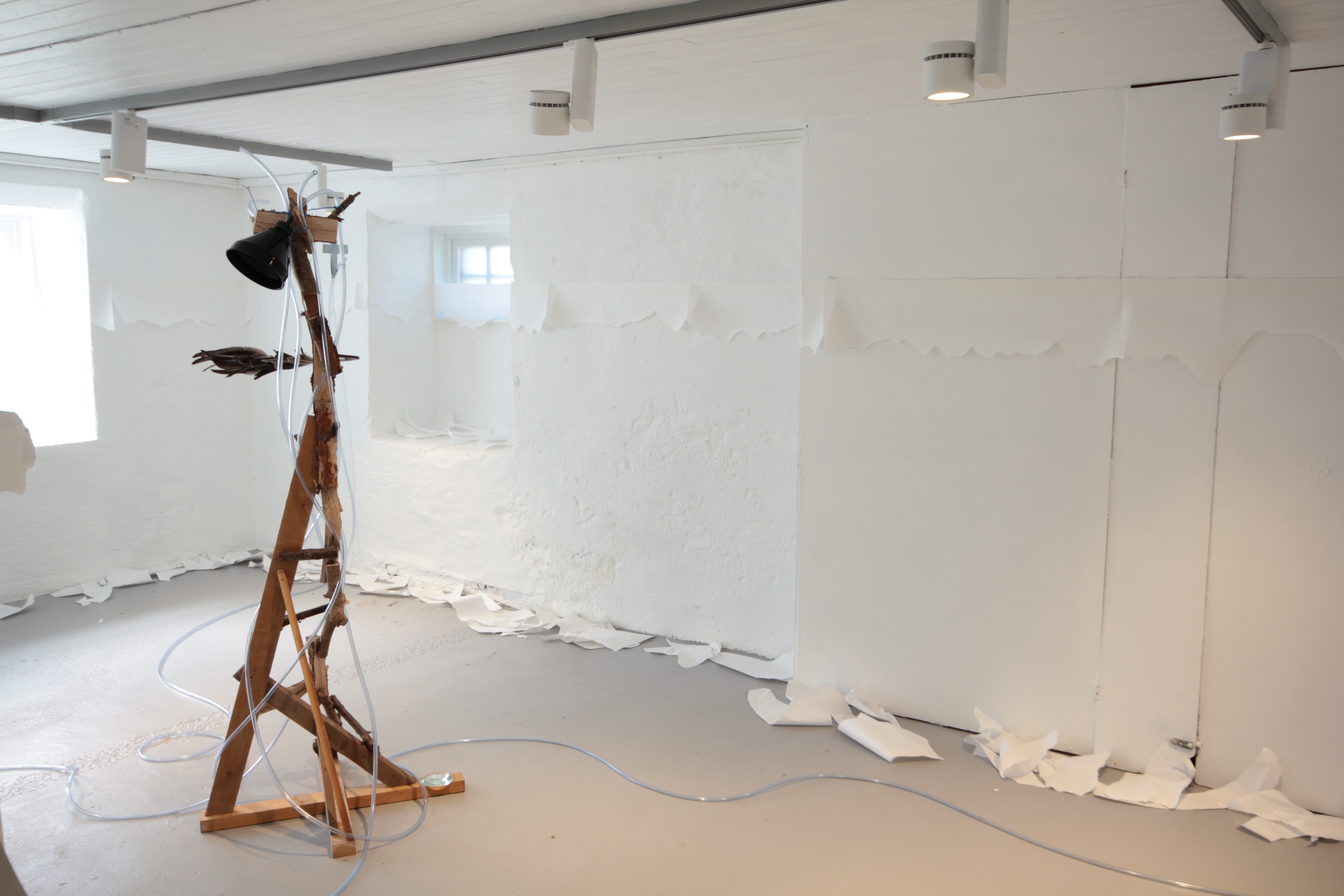 Dividing my sight with a simple prismatic optical instrument rendering me bi-cameral, blocking my forward sight and untwisting my hemispherical vision, I have been imagining and modelling a Mars/Andes landscape with clay. The clay, being a physical medium of earth, becomes a haptic translation of thought and sight of place. This split divided space allows for a gap between the two halves of my modelling. I see this as a ‘synaptic gap’. The landscape that develops somehow embodies the fractures in this imagined landscape. This line of thought has prompted my current work enquiring into belonging and identity as a form by which to comprehend the immeasurable.Translating our dream of knowing and not knowing to the edge of our physical reach, expressing our desperate fear of the loss of world.

I see this new work as an exciting model to expand. By which performance, sculpture and my sense of place and belonging opens a wider landscape of interpretation, location and space. Setting up a kind of syntactic dance and mind landscape.

To return and develop the idea of this energy between places of proximity in Molde and across water makes total sense. Almost like finding a ghost of Schwitters in the void or space between lands. The void of the water between the land and the island, town and barn, acts as a metaphorical bridge deserving of exploration and thus filled with content accordingly.

Heidegger, in ‘Poetry, Language, Thought’, talks of the act of passing from ‘one side to the other’ as a process of our dwelling. Dwelling as a verb, in transit as between the two banks of a river. This journey over the bridge is to be seen as a third element with being, belonging and space. ‘Accordingly, preserving that dwells is fourfold’.

I am interested in the idea of dwelling in the mind between places, thought and translation. A process of building and form, wrought out of an internal sense of landscape, a ‘presencing of dreamscape’. Naturally linking Schwitters’s idea of the thought object, the assemblage, site-specific installation and performance.

I will devise and set up a similar instrument in the studio in Molde and make manifest the ‘magnetic’ draw of the island and barn and studio in town across this potent void. The idea is a model as a story-form embodying the notion of somewhere else. Somewhere from the imagination concerning distance and the relationship between place, people and time. Visualising the hidden. The work would develop in tandem in the studio and in the landscape and I would want to travel from place to place as a means of directing both the presence of sculpture and the memory of performance.

At the same time I want to be open to unforeseen developments. But current thoughts about the work will likely involve both photography and drawing as help towards setting up and making the journey.

A Paradigmatic Ontology. From the Andes to Mars and back

The desire to inhabit Mars has obsessed both science and our imagination for decades. From the fear and fantasy of aliens to the real and desperate potential need to escape Earth as refugees…

This conundrum is about language, syntax and imagination in terms of paradigms, understanding and fact.

I want to make a hybrid landscape mixed from both the Andes and Mars. Using panorama photographs from both worlds.

Using an optical horizontal periscope for splitting and swapping my bicameral vision whilst blocking my forward sight, arms stretched out sideways, modelling split clay mountain ridges with the illusion of wholeness. Rendering me remote of the complete image. The divided and handed parts come together, in pairs on the table maintaining the cut, as synapse, accumulating an imaginary landscape. Somewhere between knowing and not knowing a, non-place, place. 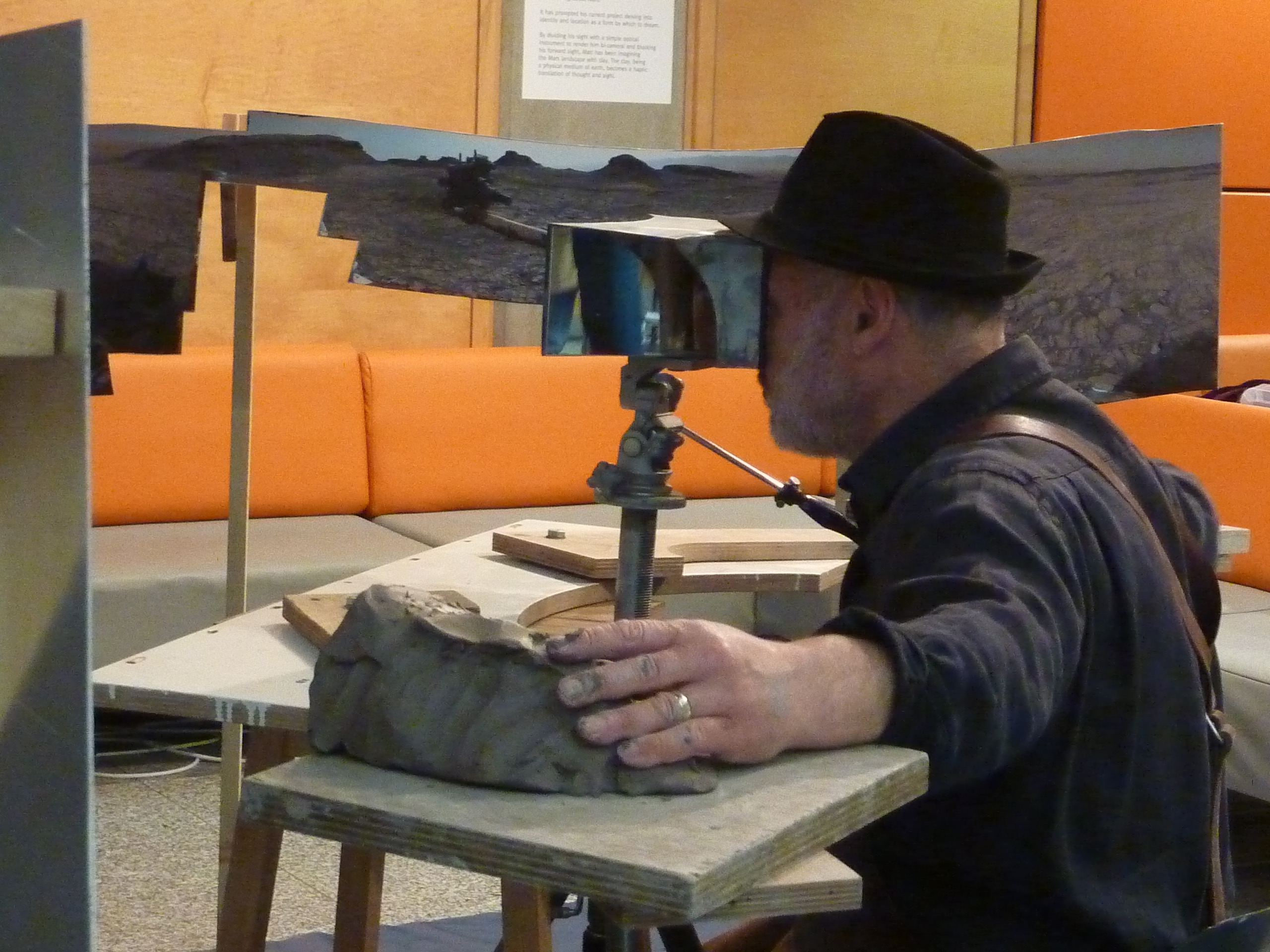 From the Andes to Mars and back. 2018 Performance at Imperial Collage London Festival 2018.

Drawings to another place….

Caught in the Head and Heart..‘All the Power and Sadness of Earthly Things’

A glass vacuum chamber stuffed with bombarded clothing from the ‘soft catch’ end of the gas gun in Department of Shock Physics, on steel and aluminium tower, LED light panel with glass slide images of nimbus, meteors, mushroom clouds and snowflakes, steel plates subjected to a copper projectile fired at 200,000 atm of pressure (1/20th the pressure at the centre of the Earth), travelling at 1Km/s.

Empires fire peoples across the globe. M L G, a child of a colonial immigrant mother and a visiting Argentinian of Italian-Spanish origin, was adopted into a South African family, then living in London. His mother was a Burgher, of Portuguese, Dutch, Irish, German and Sinhalese descent arising from the successive colonial invasions of Sri Lanka. He grew up in a house full of multi- nationals collected by his adoptive mother, a teacher of English as a foreign language and spent a great deal of his childhood in a large attic full of the artefacts of world cultures, collected by his adoptive grandparents: the grandfather an army chaplain and founding Scout, the grandmother a former tutor to the Queen of Siam. He feels all this diverse ancestry equally present in him. One day, about eight years ago in the Medina in Mar- rakech, he had an epiphany in front of a huge pile of colourful clothes which were being sorted by some women. This experience of the numinous was in the old slave station for the North Atlantic slave trade.

Graphene, the single atom thick two-dimensional building block of graphite, is a hundred times stronger than steel, harder than a diamond, a million times more electrically conducting than copper, totally impermeable with 98% transparency and was first made by simple successive peelings of graphite with Scotch-tape.

If the one atom thick graphene net is rolled into a nano tube, it becomes a microscopic wire which conducts electricity in a strange and surprising way. The electrons move through graphene in long straight trajectories in a motion called “ballistic transport” – very similar to the way a photon moves through a vacuum. The relationship between the electron energy (E) and the momentum (p) is identical to that between energy and momentum inlight,(E=cpexceptthatforlightc=3×108m/s whereas for graphene c = 106 m/s). It is as though graphene has turned the conducting electrons into photons.

The Institute of Shock Physics researches the ballistics of projectiles impacting on metal plates with the accompanying shock waves. The gas gun can fire a 4kg projectile at speeds in excess of Mach4 into test material behind which is a 6metre extended soft-capture tube, filled with old clothes to recover debris following impact. The peak pressure that can be obtained on the large bore gas gun is by the impact of a high shock-impedance material (eg tungsten) at 1.4km/s leading to a pressure of 650,000atm which is approximately 1/8th the pressure of the shock wave generated by a large meteorite hitting the earth vaporising both itself and the target area. The forces in the gun are in the realm of astronomical bodies.

With many thanks for the text and science contribution to;

Experiment and installation in the Blackett Laboratory, Imperial College. 2014′ Between Tables’ is a comment on the paradox of quantum mechanics and teleology.  Two identical tables with two sets of similar objects, chosen from my performance and studio work,  are to be viewed from the threshold between the lobby and the canteen. By putting your nose to the edge of the door your vision oscillates from one side to the other.

‘Halo Machine’ is an event found in the space between the cabin of an airplane and the extreme atmosphere outside at around 50,000ft. A small projection of warm air, caused by the air pressure in the cabin through a pressure equalising hole,  creates a halo onto the freezing cold window. It is an ongoing attempt to manifest this subtle event.  I am looking at various ways of finding, describing, in materials both the photographic, the made and the act. In the extreme realm of our comprehension and perception. Scales  both microscopic and cosmic,  somehow linking the sublime to catastrophic events like comets, meteoritic impact craters, volcanoes,  ballistics and shock waves to classical mythological images of halos and flames projecting out of the top of the heads of deities.  Somehow a de-anthropomorphism of Angels….

’24 drawings to another place’ is about graphite becoming graphene. A group of transparent drawings that are made by splitting the graphite dust between sheets of 65mm and 35mm moving image splicing tape. This splits down the garaphite crystals and produces single atom graphenes alluding to quantum mechanical ideas around the ballistic teleportation of particles…..

‘Caught in the Head and the Heart’ A study around ballistics, being in two places at once with language, violence and memory…

A group of simple quasi crystal forms share a space. One small, cold forged piece of copper sits on a ledge. The act of making produces, within the material, microscopic dislocation lines of particles that if all lined up measure 20,000,000 Kilometres, an astronomical distance, and an unimaginable journey. Another crystal form made of zinc balances on a rod, like a traveller’s staff or hunters spear, leans against the wall and a third, larger opaque crystal form, is propped up high on the wall supported by a mirrored rod, relating to the notion of architecture. Conjuring with scale, volume and weight. Graphite drawings play with the convex/concave illusion of the inside of an ancient domed mosque ceiling and the plane of seeing, echoing and suggesting the third eye.This work seems to play with analogy, with the particular and the universal – the universal and the particular, both the sensible and the mental.

AS AT ROG WEB

WOLF IN THE WINTER